Some friendships are meant to last a lifetime, which is most definitely the case for Beryl Fraser and John Johnson who recently held a combined 60th birthday party. In lieu of gifts, the friends, who hail from Send on the West Side, and who met as children when their families were neighbours, asked for donations for the Scanner Appeal.

Where To Buy Harriets Hat

With Island Medics now well underway, the MRI Scanner Appeal has had many requests to buy Harriet’s Hat or the pattern to knit Harriet’s Hat. 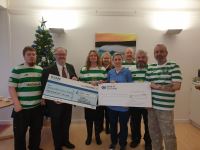 The football banter was all friendly when the Celtic Supporters’ Club (Shetland Branch) handed over a cheque of £1000 to the MRI Scanner Appeal represented by Hearts supporting Fundraising manager Derek Hart!

There is nothing like a Wool Week “Spree” for involving visitors in Shetland life. This week the Shetland Textile Museum handed over £577.50 to the MRI Scanner Appeal from their “Spree” held at the Sound Hall.

A big thank-you goes to the Shetland Weight Training Club which has deposited £430 for the MRI Scanner Appeal – money raised at the door from the Strongest Man competition held in August.