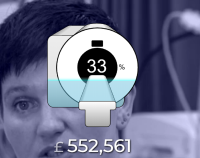 For the Shetland Islands Council staff working in the “White House” (8 North Ness) a Christmas buffet and raffle was a wonderful opportunity to get to know each other and raise money for the MRI Scanner.