A surge in local donations has pushed the MRI Scanner Appeal past the quarter-way mark with the fund now at £418,808.

A donation by the Yell Health Centre Support Group of £2,500, coupled with three donations collected to mark milestone wedding anniversaries, a donation of £1,100 from the Bon Accord Motorcycle Club in Aberdeen, £2,723 from the clothes swap held at Sound Hall, £3,200 from the Whalsay Golf Club Local Charity Event and a donation of £6,228 raised by the Filipino community in Shetland, along with many other collections, has seen the totaliser suddenly shoot up.

Colin Marsland, trustee for the Shetland Health Board Endowment Fund, said deposits were coming into the Endowment Fund for the MRI Scanner on a daily basis.

“The quarter way point is an important milestone as it reflects Shetland people’s sustained commitment to this project. To raise this amount has taken an enormous amount of effort by the local community. For this we are incredibly grateful. The MRI Scanner Appeal team is continuing to approach organisations that make grants to charities to request they consider awarding a generous donation to our fundraising campaign, to add to the magnificent amount already raised locally”, he said.

Annette Jamieson, from the Yell Health Centre Support Group, said that while supporting another charity was not normally within the group’s remit, an MRI Scanner for Shetland would make a difference in the lives of many.

Harriet Middleton, who has now raised more than £50,000 for the MRI Scanner Appeal through the sale of Fair Isle patterns for a hat and headband and knitted products, continued her work with the support of the MRI Maakers this week at the Shetland Wool Week.

On Monday she was in the Hub at the Shetland Museum and Archives for the first time, meeting many interested people keen to support the Appeal. 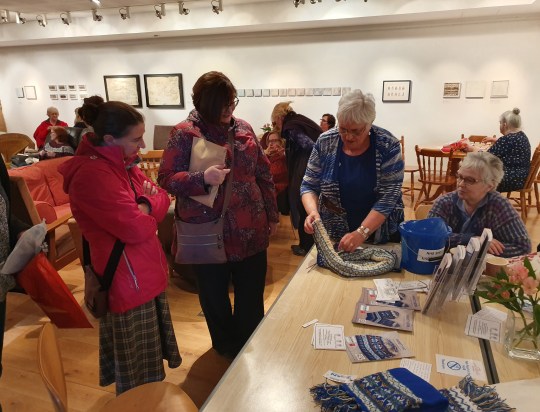 It was especially poignant for Harriet and the team, who have come to know knitters around the world through the pattern sales, to meet their supports who were visiting Shetland for Wool Week.

Her son, Billy Middleton, who works for NHS Shetland, and who is the behind-the-scenes driver of the Harriet’s Hat project said his mother was working on a new design – a versatile cowl.

“We’re incredibly grateful for all the continuing support, in all its forms, from all over the world. So far 62 knitters have contributed to our stock, and our MRI Maakers have done so much more than knit. Yarn stores both within, and out with Shetland have been selling huge numbers of patterns for us. At every turn, whatever we’ve needed, there’s been a community of people stepping up to help us. Thank you!” Billy said.

Harriet and the MRI Maakers will be in the Town Hall for a special MRI Fundraising Event on Thursday, October 3rd from 6pm to 9pm.