A lot has been done to raise money for the MRI Scanner Appeal but raffling your chest hair (it made £65!) takes the prize for the most original effort.

Posted on 7th May 2019 in News, Donation, Event, Fundraising 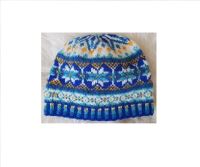 Harriet Middleton, our MRI appeal knitting expert, has designed a pattern for the MRI Scanner Appeal featuring the colours of the logo

At the beginning of April, 54 staffers from the NHS Shetland team took part in the Peerie Paddle to raise money for the MRI Scanner.